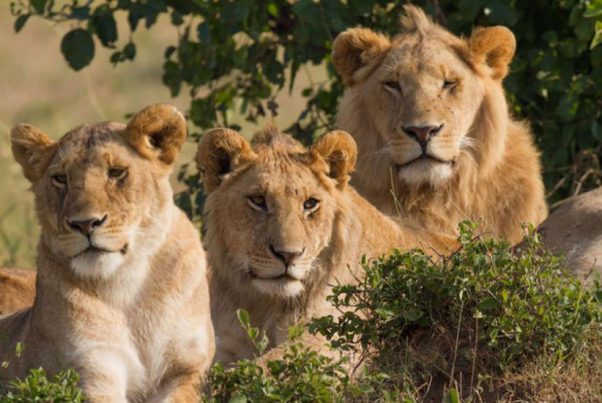 When it comes to African safaris, Rwanda isn’t only popular for its mountain gorilla trekking adventures but also for its incredible big game that make it one of the most incredible safari destinations that is worth visiting for authentic African experiences. If you have ever thought about sighting the big wildlife species while on safari in Rwanda then count visiting Akagera National Park a must in your travel plan. The word big five wildlife was derived by the big game hunters and it denotes the five most challenging wildlife to hunt in Africa while walking. These rare wildlife species feature among the few dangerous species and also the most famous, mostly thriving within most of savanna grassland and forested protected areas. They include; Lions are a few big cat families and also feature under the popular big game species that you shouldn’t miss to catch a glimpse while on game drive in Akagera National Park. Male lions thrive up to 10-14 years while in the wilderness given the injuries that they also sustain due to frequent fights with rival males which largely reduce their life pan. While in captivity, lions thrive for over 20 years. They largely thrive within savanna and grassland protected areas. Unlike other cats, Lions are rarely social. Their pride comprises of related females and offspring and a small population of adult males. Families of female lions tend to hunt together, preying largely on vast ungulates. Lions are mainly predators though they are scavengers. Whereas they do not hunt humans, some of them do. These are mostly active around sunset and sunrise and this is the best time for them that they hunt for more prey. They have a unique ability to adapt to changes in prey presence. Small preys are taken where huge ungulates are less common. They normally hunt for dung beetles as well as adult elands. These are rarely spotted species among the big five game. They are best at tree climbing and they can guard their prey on the tree to keep it off from lions and hyenas. They are also perfect when it comes to swimming and at times depend on fish. African elephants can be sighted moving in large numbers in savanna grassland areas. Elephants are the largest land mammals in the world. They are exceptionally intelligent featuring emotions, memories, problem solving skills, deep social bonds and their skin is 2.5 cm thick. They are largely herbivorous and can be sighted in various habitats including savannas, forests, marshes and deserts. They usually wonder around water areas. African elephants communicate across distant areas at a low tone which humans can’t hear. Besides savanna grassland elephants, there are also forest elephants that thrive in most of African forests. The Cape Buffaloes also come in large numbers and adults feature horns, fused bases, making a continuous bone shield across the top of the head also known as a boss. They are known to be dangerous wildlife species. The African buffaloes in any destination have not been habituated like it is a case of the Asian domesticated buffaloes, water buffaloes. Apart from humans, African buffaloes have few predators besides the lions and huge crocodiles and they have ability to defend themselves. Rhinos are largely herbivores; they have small brains, 1 or 2 horns and thick protective skin which are made of collagen positioned in a lattice structure. They depend mainly on leaves. They are a few most threatened of the big five wildlife species. Rhinos are categories in Africa-the black and white rhino. They also have a poor sight and can at times attack tress and rocks accidentally but they have the best hearing and sense of smell.

Rwanda is credited for its primates, Virunga Mountain ranges, water bodies, big game as well as other wildlife species making it an incredible safari destination for you to experience what Africa offers to the world. For excellent views of the big five wildlife species in Rwanda, visit Akagera National Park and you will be amazed with lifetime experiences in the wild. Akagera National Park is equally the best like the Maasai Mara National Reserve.