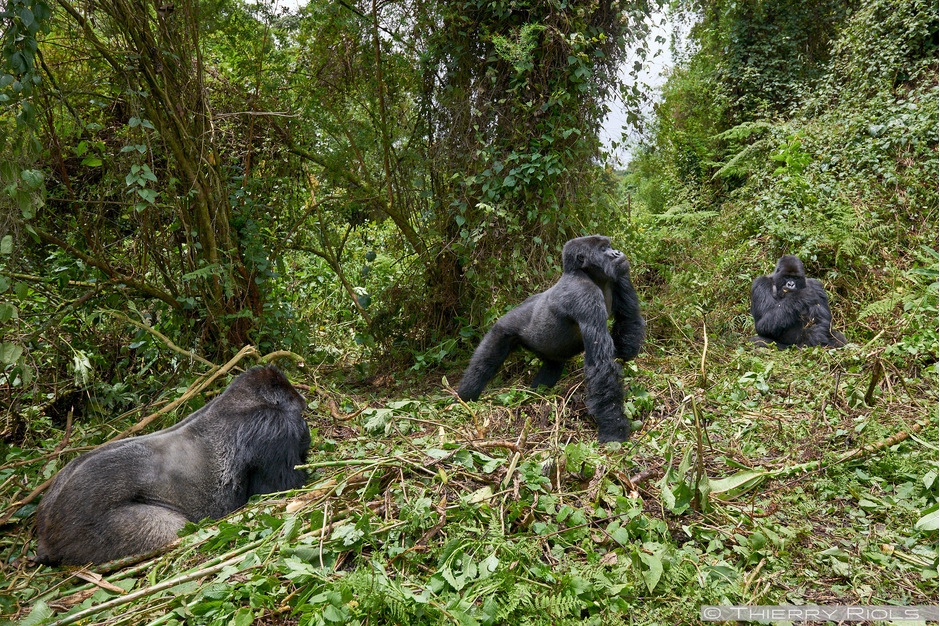 The Democratic Republic of Congo is famous for protecting both Mountain and Lowland Gorillas. Gorilla Trekking is one of the top tourist activities in the Democratic Republic of Congo. Gorilla trekking is done in Virunga National Park and Kahuzi – Biega National Park for Mountain and Lowland Gorillas respectively.

Kahuzi Biega National Park conducts gorilla trekking every day based on the availability of tourists. However, the Democratic Republic of Congo offers the cheapest gorilla trekking permit compared to Rwanda at US$1500 and Uganda at US$700. The gorilla permit for Kahuzi Biega National Park cost US$400 and only one hour is given to see and take photos of the amazing lowland gorillas.

Trekking Lowland Gorillas in Kahuzi Biega takes between 30 to 6 minutes depending on the movements of the gentle giants. During the trek, expect to see other primates, birds, forest mammals, reptiles, insects, and so on. There is also low season discounted rates on gorilla permit at US$200.

Lowland gorilla trekking in Congo is done throughout the year but the dry season is in the months of June, July, August, September, December, January, and February. During the dry season, there is less or little rainfall in the forest therefore access roads and gorilla trekking trails will be dry and passable compared to the wet season when the trails are muddy and slippery which makes trekking difficult.

Kahuzi Biega National Park can be accessed from Rwanda where tourists will fly to Kigali international airport in Rwanda to Kamembe in Cyangugu town which takes about 6 to 7 hours’ drive and then cross the border at Le Grande Barrier into Goma and then drive to Bukavu town where you will connect to Kahuzi Biega national park.

Virunga National Park is one of the parks found in the Albertine Rift Valley in the eastern part of the Democratic Republic of the Congo. It was created in 1925. In elevation, it ranges from 680 m (2,230 ft) in the Semliki River valley to 5,109 m (16,762 ft) in the Rwenzori Mountains. From north to south it extends approximately 300 km (190 mi), largely along the international borders with Uganda and Rwanda in the east

Virunga National Park is the most popular gorilla park in the Democratic Republic of Congo. The park is famous for mountain gorilla trekking and so, many of the tourists visiting DRC come with the aim of meeting Mountain gorillas in their natural habitat. The search for Mountain Gorillas takes between 2-6hrs depending on the movements of mountain Gorillas. Virunga National Park is situated 35 Kms from Goma city and one of the most amazing journeys however, the park experiences seasonal rebel attacks which threaten gorilla tourism. Today (18th October 2022) the park is still closed to due political instability – we hope it to be opened in a near future.

Virunga National Park shares the Virunga region with Uganda and Rwanda. Mountain gorilla trekking in Virunga National Park starts very early in the morning. Trekkers need to wake up early, take breakfast and carry all the things they will need while tracking the gorillas. These include long-sleeved shirts, a rain jacket, hiking shoes, warm long stockings, hand gloves, cameras, water, a passport, VISA, and gorilla permits. After all this is sorted, visitors head to the park headquarters or briefing by the park rangers and wardens. The briefing covers several topics among which include the history of each gorilla group, gorilla habitats, and gorilla trekking rules. Passports will be required for cross-checking. Checking passports help the park management allocate gorilla groups according to the language of the trekkers.

In terms of location, both Kahuzi Biega National Park and Virunga National parks are situated in the Eastern part of the Democratic Republic of Congo.

On the other hand, Virunga National Park faces seasonal instabilities which halt gorilla tourism for a certain period of time. Kahuzi Biega National Park is fairly stable throughout the year.

Virunga National Park was well managed in its first 35 years of existence when poachers were under control.

In 1960 when the Democratic Republic of Congo gained its independence from Belgium, the park management started collapsing.

In 1969 the new president of the Democratic Republic of Congo, Mobutu, revived conservation and the park was renamed Virunga National Park.

In the 1907s the park got a lot of funding and the conservation work resumed until the 1980s when the president then lost grip and instabilities ensued.

In the 1980s UNESCO changed the status of the park to endangered, as poaching and chaos were destroying its resources.

Virunga is used for mining oil and in the near future about 80% of the parkland will be used.

In the southern region of the park, the landscape consists of montane tropical forests, and alpine forests, and it has old and new lava flows.

In the central region of the park, the landscape consists of African savannah, marshes, riverine forests, and lake shores.

In the northern region of the park, the landscape consists of lake shores, African savannah, riverine forests, alpine forests, and glaciers.

This park has the highest death of rangers as they are often killed by poachers.

About one-quarter of the remaining mountain gorillas in the world are housed here.

Virunga is the world’s only park to house three great ape species, including the mountain gorilla, chimpanzees, and Grauer’s gorillas.

The Okapi is a zebra/giraffe-type species, considered to be endangered. It is found in Virunga.

Kahuzi Biega is one of the only 2 parks with lowland gorillas in the world. Isn’t this fascinating? The other park also found in Congo is Maiko National Park but Kahuzi Biega is still the largest of the 2.

There were an estimated 600 living in the park in 1990, but there are only believed to be a couple hundred still alive after the fights of the 1990s and 2000s.

The Park is managed by Congolais pour la conservation de la Nature (ICCN) along with the Wildlife Conservation Society.

This park was opened in 2015 but was established in 1970 by a Belgian photographer and conservationist Adrien Deschryver who also practiced habituation on these gorillas during his stay at the park.

This park is one of Congo’s largest parks with 2 sectors; Highland (Open for visits) and the lowland (closed for visits)

Kahuzi Biega became listed as a World Heritage Site in 1980 as it harbors about 2000 of the remaining lowland gorillas of the world.

Kahuzi Biega has only 3 Gorilla groups habituated for visit by tourists.

This park doesn’t only have lowland gorillas but a number of other animals like the Forest Hog, the forest Elephant, Antelopes, and the bush duikers.

A documentary titled Virunga received an Oscar (Academy Award) nomination in 2015. The film highlights the conservation challenges to the park, which is Africa’s oldest national park.