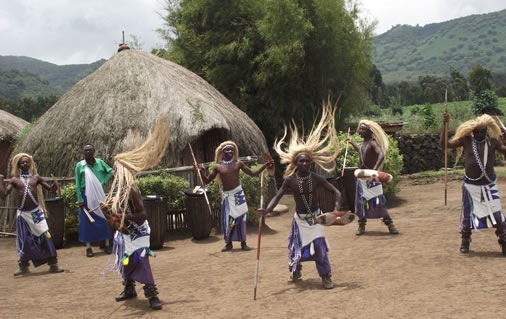 Rwandan Traditional Music and Dances
In Rwanda, music, dance and drama are among the priority and members gather in companies to enjoy the experiences. The Rwandanese gathers in the afternoon or evening to relax while dancing, singing and prays.

Types of dances in Rwanda

Dances like intore (“the elite”) danced in the royal court to cheer up the king. It should also be noted that all events in the country are embellished with traditional dance and songs: birth celebrations, weddings, traditional baptism (guterekera), launching of new projects, anniversaries, political parties or the welcoming of important visitors.
Intore dance refers to the war dance which encourages those who wage war or hunt. Intore means “the elite” or “leader.” Intore troupe participants are chosen for their exceptional moral and physical qualities. While training, not only do they learn to dance but they also receive education in moral values.

Ukurambagiza – Courtship dances where ladies and gentlemen dance together – other call it the Dance of Fiances and Ukurambagiza in Kinyarwanda . In this single ladies take part in the courtship dance until they are married allowing their beauty to be accented by movement and dance.

Umuganura Harvest Festival – This was banned by the Belgian Colonial Authorities in 1925 because, the Belgians  got scared of the Rwandan King gaining extra power since it was the second most important even in the kingdom after coronation of a new king. This festival for long has been part of traditional Culture in Rwanda for centuries; communities gathered to share and celebrate the first harvest of fruits, this was accompanied story telling, Dance, music, drama and local brew.
Female dancers dressed in festive gowns perform traditional dances of thanksgiving and honor the Traditional Deity for blessing them with a bountiful harvest and a time to bring and bless seeds for the new harvest to come.
To add more flavour, the Rwanda music is accompaned by musical instruments likr drums, xylophones, the inanga is a traditional instrument similar to a guitar, and has 9 or 12 strings (made from cow hide), and made from a wood called umyungu, The umuduli is a single-string traditional instrument, The amakondera is a Rwandese horn among others.

Like other African societies, Rwanda has also got a variety of songs and dances which range from acts that demonstrate heroic commemorating excellence and bravery, humorous lyrics to hunting root. The traditional songs are often accompanied by a solitary “Inanga”, a harp-like instrument with eight strings.
Rwanda’s tradition dances are backed by a drummer group, which normally comprises of seven to nine members.
But today, the exciting act can be arranged at short notice through the national museum in Butare, and normally performs during ceremonial events.

In Rwanda, music, dance and drama are among the amusing activities not only to Rwandanes but also tourists. After a day of long hour of moving from one tourist destination to another, visitors need relaxing in the evening to enjoy the Music, Dance and Drama in which they can also participate. Visitors can participate while clapping, druming, singing and so on.