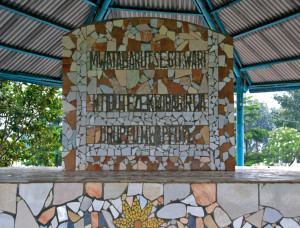 Gisenyi genocide memorial is located within the grounds of an otherwise ordinary cemetery on the outskirts of Gisenyi area in North Kivu region on Democratic Republic of the Congo boarder. Gisenyi genocide memorial contains the remains of over 1,200 people murdered during the Rwandan 1994 genocide. Seemingly neglected, these grounds at the foot of a mountain are a strip of marshy land that for decades leading up to the genocide served as a final resting place of town residents.

The area surrounding the cemetery earned the notorious moniker “Commune Rouge,” for it was here that victims were brought from a particularly dangerous roadblock called “Corniche” as well as the nearby locality of Nyundo to be slaughtered.

Today gravestones, sometimes demarcated by low concrete walls and often mounted with a cross, still dot the grounds, following no pattern at all. The genocide memorial is only set apart from these individual tombs by a high, red brick wall protected by a bolted iron gate.

While it was one of the first genocide memorials in the country to be built, with the help of both IBUKA, the genocide survivors’ organization, and the Ministry of Youth, Sports and Culture, interviews with local survivors suggest that this memorial is by no means near its ideal shape. Several of those with whom we spoke expressed a desire to include exhibitions and photos so that the site is clearly set apart from the ordinary tombs that surround it. “The people who instigated the genocide came from our region,” one survivor says, “and for this reason we would like the memorial to be particularly dignified.”