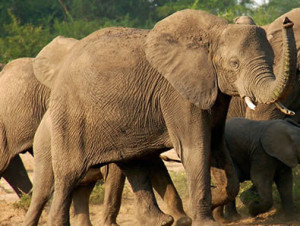 Situated at lower altitudes an the Tanzanian border, Akagera is dominated scenically by a labyrinth of swamps and lakes that follow the meandering course of the Akagera River, one of the main sources of the River Nile.

Giraffe and Zebra haunt the savanna alongside more than a dozen types antelope, such as the diminutive Oribi and the world´s largest Antelope, the Eland. Pods of Hippopotami splutter throughout the day while out sized crocodiles soak up the sun with their vast jaws agape. Along the lake shores are some of the continent´s densest concentrations of water birds, while the marshes are home to the endangered bird species like the exquisite papyrus Sonolek and the bizarre shoe-bill, probably the most eagerly sought of all African birds.

The Park covers over 2500 sq km of savannah west of the Kagera River, which denotes the frontier with Tanzania.

The park has a variety of wildlife and is a habitat for over 500 different species of birds. There are accommodation facilities on the edge of the park at Gabiro, 100km to the north. Last year the Akagera Game Lodge, located in the Park near the Lake Ihema, has opened its doors again.
So you will feel always in touch with the wildlife. You can taste the dusk over the lake and share the breakfast with the baboons.

It is best not to visit the park in the rainy season (Dec, March and April) since many of the routes become
impassable. Visiting the park is only possible with a land cruiser, accompanied by an ORTPN ranger. We offer full- and half day-trips around the lakes.

Camping alongside the picturesque lakes of Akagera is a truly mystical introduction to the wonders of the African bush. Pods of 50 hippopotami grunt and splutter through-out the day, while out-sized crocodiles soak up the sun with their vast jaws menacingly agape. Magically, the air is torn apart by the unforgettable high duetting of a pair of fish eagles, asserting their status as the avian monarchs of Africa’s waterways.