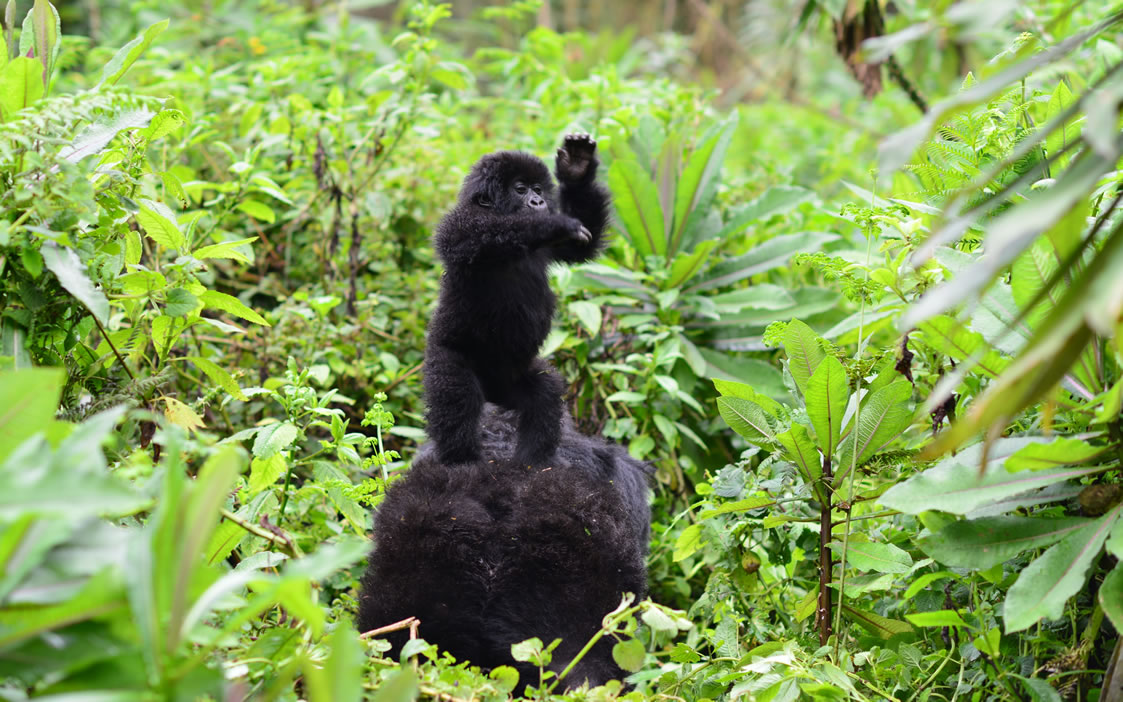 The almost extinct mountain gorillas are a rarity on earth and have become with the years to a real tourist attraction of East Africa. Every year, numerous tourists travel to Uganda and Rwanda to experience the mountain gorillas up close.

The history of gorilla tourism in Africa

Over the last 100 years, many people and groups have worked together to secure the survival of the mountain gorillas in the jungle forests of Africa. Its history dates back to 1902, when Robert Von Beringe, a German captain and the first European, observed the mountain gorillas on the Sabinyo volcano, which lies between Uganda and Rwanda. 1960s – Habituation of the Gorillas to Humans

After the independence of the colony Belgian Congo in 1960 (which later became the name Zaire), the volcano national park was divided into the volcano national park in Rwanda and the national park Virunga in the DR Congo. In 1967, the American zoologist Dian Fossey carried out her first long-term study on the wild gorillas in the volcanoes national park, and thus the habituation of the gorillas began the presence of the people. In 1973, the National Tourism and Development Office of the National Park was set up in Rwanda, which introduced new laws regarding national parks and the hunting of wild animals. As a participant of group or individual trips to Rwanda, you can encounter the fascinating animals during a gorilla trekking on a Rwanda voyage.

During the period between 1970 and 1980 the focus was on the fight against poaching. The emphasis was placed on how to reduce the game dairies and control the spread of traps and wireworms to protect the gorillas. Above all, the killing of the Silverback Digit and five other gorillas within a short period of time in the volcanic national park in 1978 was the worst moment ever and led to international concern about the survival of the gorillas. The grave of Digit is still visited in the old Karisoke Research Center near the tomb of Dian Fossey.

The first attempt to connect gorilla protection and tourism was made in the Kahuzi-Biega National Park in 1973 and here we have low-land gorillas. The park was first published in the Amtsblatt in 1970 and in 1975 it was extended to 6000 square kilometers. The first gorilla trekking was carried out in 1973, but later they were suspended because there was not enough study and experience on the impact of human gorilla contacts and because the “gorilla rules” were not yet clear.

The mountain gorilla project of 1979 was a turning point in the history of gorilla protection. This resulted in a convention between the Government of Rwanda and a consortium of several private animal and nature conservation organizations, including the African Wildlife Leadership Foundation (AWLF), WWF and FFPS (Fauna and Flora Preservation Society).

The idea was to introduce gorilla tourism and education as the main means of anti-poaching efforts to achieve better gorilla protection. The possibility of opening up new tourism-based jobs and increasing revenues would have had to change local and national political attitudes in favor of the gorillas.

Two groups of gorillas near Karisoke (Groups 11 and 13) were selected to perform an exercise of “habituation” so that they could be opened to tourist activities. Other families were excluded because of the aggressiveness of some gorillas against humans or because they were too far from the starting point of the trekking. Group 11 had a very quiet silverback called Stilgar, and in the group there were four young animals. The first experimental trek started in October 1979 with some residents from Kigali. The first foreign tourists who visited the gorillas were Europeans, who traveled in November 1979 with Trans-Africa Overlanders.

The first visits were limited to six persons per family, and the time was also limited to an hour, as the attitude of the Silverbacks would be reversed in opposition to a long visit. The price of the visit was 20 USD per trek. It is precisely this “gorilla trekking” which created the conditions for the so-called “gorilla rules“, in other words, what humans should or should not do when they meet the gorillas in their habitat; And this came as a reflection of the reactions of the gorillas to the visits of the people. The visitor stream to the volcano national park soon contributed to improving the accommodation conditions in Ruhengeri and creating new jobs as patrolling guards and trekking guides in the national park. Today, many people travel in the country “the thousand hills” to experience the mountain gorillas in their natural habitat.

On December 27, 1985, Dian Fossey was killed in her hut at Karisoke Research Center. Her death is still a mystery. She was buried in Karisoke next to her beloved figure in a cemetery, which she laid out for the gorillas. After their death, the counting of the mountain gorillas began in 1989 and it was found that there were about 324 gorillas in the Virunga protected area and 320 in the Bwindi Impenetrable Forest area, a total of 644 mountain gorillas.

In 1992 the male silver back named Mrithi was killed by “Group 13” (one of the accustomed families). In 1994 the civil war broke out in Rwanda and as a result almost 18 to 22 miners were killed during the war. There is another sad part of the genocide story in Rwanda from 1994: the genocide regarding the mountain gorillas and the end of gorilla tourism.
It was only in 1999 that the Volcanoes National Park was reopened by the Rwandan Tourist Board and National Parks (ORTPN). The price for the gorilla tracking was 250 USD. Later it was raised to 360 USD and in 2006/2007 the gorilla trekking already cost 500 USD.

On October 17, 2002, mountain gorillas Conservation Fund held the 100th anniversary since the discovery and identification of the Mountain gorillas in Rwanda, and in 2004 Keesling won an award from the British Airways for its efforts to protect the gorilla world-wide. In 2012, there were nine Gorilla families in the volcano national park in Rwanda that can be visited by gorilla tourists, and since 1 June the price for access to the gorilla area is 750 USD. In any case, these high income from gorilla tourism could not be foreseen a decade ago. In addition, there is much more potential from the investment in gorilla tourism back to the conservation of gorillas.

The history of gorilla tourism begins in Uganda, when Bwindi became a national park in 1991. In the 1970s, Uganda experienced a terrible delay in the development of tourism because tourism was banned and national parks were declared hunting areas by the Idi Amin dictator. In this period, no preservation of the gorillas was possible. In the 1980s the country was in the civil war. It was only in 1986 that the National Resistance Army won the battle for power in Kampala. A few years later, after restoring the rule of law and reconstructing the state’s public institutions, Uganda was ready at the beginning of the nineties to restore relations with the other countries where gorillas were discovered. The first step in Uganda was the habituation of the Mubare family in Buhoma sector in which the Silberback Ruhondeza showed good reactions in contact with the people and therefore stimulated the development of gorilla tourism. The Mubare family has been accessible to tourists since 1993. Since then, tourists visit Bwindi National Park for mountain gorilla tracking experience.

In 2004 there were already four gorilla families who could be visited on a group trip through Uganda – Mubare, Rushagura, Habinyanja and Nkuringo. The approval for the gorilla trekking cost 360 USD.

In 2012, there were nine gorilla families in the Bwindi National Park, accustomed to the opening of two new trekking points in Ruhija (in the central area of Bwindi) and in Rushaga (in the south-east part of Bwindi). The permits for gorilla tracking on an individual journey through Uganda are sold for the price of 600 USD.
By: Paul Basudde