The main trekking we did was to see the gorillas though we also had a fun visit to see the Golden Monkeys who hurtle about the bamboo forest with great abandon.

The gorilla trek was more arduous and went up and down and through vegetation until we saw a large silverback just laying back relaxing. There were younger ones around and a mum/baby in the trees, all of which we saw later. The silverback decided he should move, rolled over, roared, showed his extensive teeth and raced past us leaving us somewhat stunned.

We followed and had an enchanting time watching him being joined by mum and baby and two youngsters. The baby was interested in crawling off to look at us and mum would let him/her go so far and then pull him back. The silverback enjoyed a grooming session from the mum, stood up and nearly sat on the baby (sharp intake of breath from the observers) and took off again.

Then followed a near toboggan ride down newly machete vegetation towards the bottom of the valley, stopping en route to see the biggest silverback tucked away in his nest calmly chewing on the bamboo. Just loved the whizz down the hill – felt about 4 years of age! 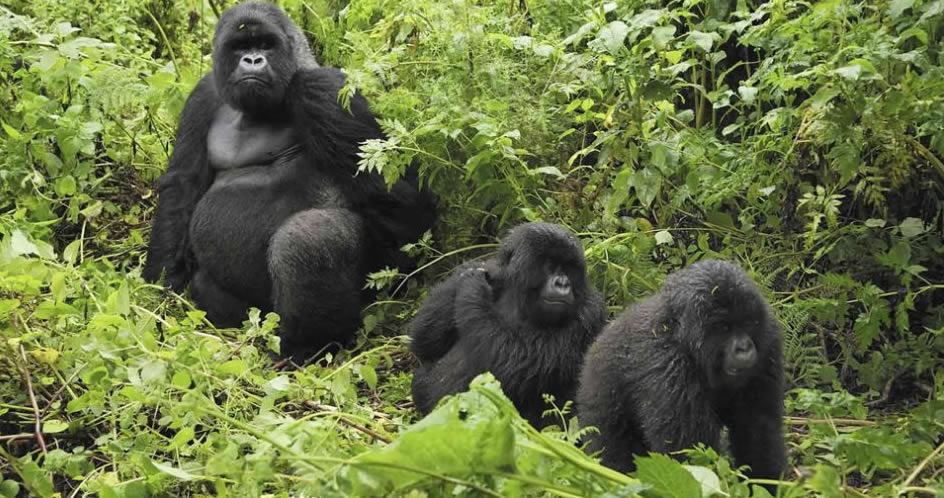 From listening to other people, it seems that every gorilla trekking is different and rather wished could have done more as some did but it is pricey but, on the other hand, you could see it as priceless – where else would you get such delight and wonder?

I and my fellow travellers I was travelling with were lucky enough to be selected to track the Susa group. Another tourist with us had information about this group and she said the group has the big number in that area and was normally the hardest to get to, so we were both excited and a little nervous about the trek ahead! I am not going to lie, the trekking is hard work! It took us nearly two hours simply to reach the tree line and the altitude really takes your breath away if it’s not something you are used to. In the forest itself, you have to be very careful where you tread as the undergrowth is dense and slippery, even a couple of our porters took a tumble every now and then to carry our big bags equipped with our perfect cameras ready to take unforgettable shots and videos while with the mountain gorillas in the mist!

A handy hint for those who are unsure of what to wear, I and one other in our group wore jeans for the trekking, hut for protecting my head, insect repellent to protect my body from the tsetse flies and much more dangerous insects, walkable shoes in the muddy forest. The rest of the group thought we were a little mad and said that we would have our movement restricted. But both of us came away with scratch and sting-free legs, the rest of the group were not so lucky.